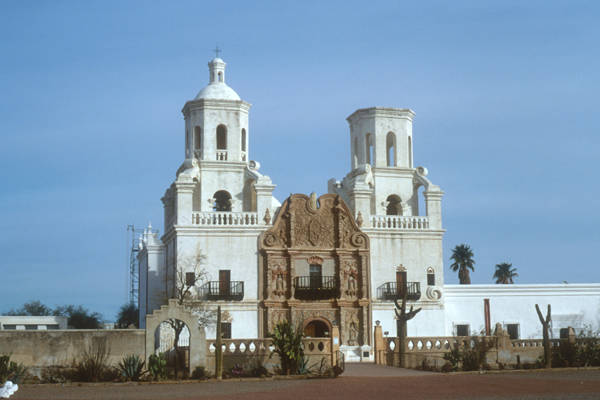 There have been sightings of an old padre with whispy white hair wandering around the many different areas of the church.

Usually the old padre priest is seen at dusk or at dawn which are just the times of day when the churches candles needed to be lit or extinguished.  Also, the ghost of a middle aged nun with a very noticable limp has been reportedly been seen many times over the last 150 plus years with her seen always leading five (5) Indian children from an outbuilding that used to be a school house and then over to the actual church. The orignal school house burned down one night in 1949 trapping and killing all of the children inside. The villagers reported to authorities that an unknown nun was clearly seen trying to help all the children to escape the fire but was unable to do so.

Some mysteries remain about the construction of the current church, and it is known that the current church structure is built about one and a half miles south of the original church structures location. The current structure completed in 1793, the present San Xavier del Bac is made of kiln-baked bricks that are covered with white lime plaster taken and hauled from the nearby mountains to the South East. The foundation of stones and mortar under the front towers is nearly six feet deep with the stones having been brought in by ox cart. The 2nd church (the one seen today) was built in its current location due to its higher ground, allowing it protection from flooding.

The original church was made of logs brought in on ox carts from the Madera Mountains miles away. After many attacks from Apache Indians that church was finally burned to the ground in 1748. Among the facts known is that the current structure was built in 1783 from a $7,000 peso loan made from an early Spanish Tucson Merchant who had come to New Spain to escape the wraith of then King Carlos. However, sometimes the questions of today often far outnumber the known answers of yesterday.

Seemingly, one question is that to this day the east tower of the Mission has never been completed. However, many records exist to explain about why it was left unfinished. First the church's original $7,000 Peso loan was not enough, and formost the priests decided not to finish it so that no taxes would have to be paid under the King of Spain's Royal Decree that all unfinished buildings in Spain did not have to pay any taxes.

However, some old records also reveal that a popular Pima Indian worker was killed during construction in 1784 when he fell down off a ladder and was impaled through his head with an iron bar and no other Indian could be convinced to go up to work there again. It is also very interesting that such a well designed and built beautiful structure has so very few records of its architect, its leading builders, or even the artists responsible for creating it.

It has been determined that four main artists painted the artwork inside the church, with the assistance of many Pima Indians who filled in the colors with native available stains from plants and animals. Almost every available space inside the mission has a painting or sculpture. The paintings have the look of the Folk and Baroque style art of 1700's religious figures. The colors, though some are somewhat faded from time and past burning of religious candles are still brilliant and quite striking. Other paintings and art works have been painstakingly restored using only original materials found in the desert. The amount of artwork on the walls and ceiling is completely overwhelming considering it was done over 220 years ago by Indians climbing up over 50 feet to the ceilings on log ladders that were tied together with leather straps. When it all really hits you, it is nothing short of breathtaking. There is the mystery of who the architect or builder was often fueled by an old inscription "Pedro Boj. Ano die 1797 (a day in 1797)" on one of the wooden doors at the entrance. But, Pedro Bojorquez was a late 1700's manufacturer of doors in Tucson, and a master carpenter who might have carved his name into the wooden doors there just like other craftsmen and tradesmen from Tucson did during the time perod. 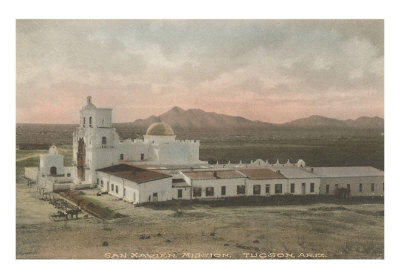 The Mission San Xavier Del Bac concept and idea was founded by the Jesuit priest, Father Eusebio Francisco Kino who did not direct the building of the church, and was a priest commissioned along with others of his order by King Carlos of Spain to assist in 'gathering the riches' and 'spreading the word of God' in New Spain's most northern frontiers in 1692. While first traveling to what is now known as California and being disillusioned, later Kino found a Pima Indian village (just 10 miles south of what would later be Spain's Tucson Military Presidio Fort) that was then near a year round running stream bed of water ("Bac" means "where a stream emerges") in the Sonoran Desert. Kino named the area Santa Maria.

Catholic Father Kino stopped and preached to the people who were receptive to his teachings. Father Kino then abruptly moved on, but visited the Indian Village again often during his many travels. Kino brought livestock, grain and fruit trees into Bac and shared them with 800 people living in the vicinity. From 1692 to 1782 various priests took charge of the church and either visited regularly or were actually commissioned to live there there. The services took place in the original one room log structure. During this time the log church was vulnerable to Apache Raids and attacks but was often left untouched. Charles III of Spain later banned all Jesuit Priests from Spanish lands because of their failure to return 20% of all the gold and silver found in their areas as they had been contracted to do.

From the late 1760's and beyond the San Xavier Del Bac Mission would be run by the Franciscan order. Today's mission church was built in 1783. The church's patio area was built as a defense against the regular Apache Indian attacks made for food and supplies. Those rifle slots are still in evidence. Not much is written about the Mission from the time it was built until 1828. The new struggling government of Mexico formed after a war for its independence was won breaking off from Spain's support and administration. In 1822 the newly formed country of Mexico confiscated all of the missions within the new country's borders. Priests where left unsupported facing very hard times, and by 1831 San Xavier was without a priest.

When the last of the priesthood left San Xavier Mission, Native Americans buried important items from the church for safekeeping. At this time Spain had been completely pushed out from the areas as the result of a country wide revolution and the new Mexican government demanded complete loyalty from all Spanish Priests in the new country or face death. Many priests, including the priest at San Xavier, refused. Many priests were systematically murdered by the new Mexican Government, however the priest serving at San Xavier was instead arrested and sent home to Spain via the Port in Veracruz after a long journey on an ox cart, and the San Xavier Del Bac Mission was suddenly left vacant.

From 1828 to 1858 the church began to decay and local Indians, concerned about the church, took the church furnishings and valuable relics out into the desert and buried them as a way of preserving them as best they could. In 1849 when the California gold rush began, a large number of would be prospectors came through the trail leading to California through the area and passed by the mission on their travels to California. At that time some reported in their journals seeing very ornate gold and silver objects surrounding the altar. However, on their way back from the played out gold fields of Sutters Mill California they reported in their journals that all the objects were then gone. 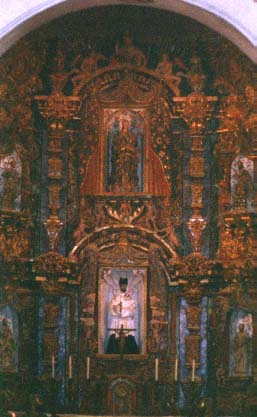 In 1858 a diary entry by a prospector from Ohio noted that the door to San Xavier Del Bac was always open, that the church had been completely taken over by birds, and that the Indians respected the structure far too much to vandalize it. The decaying church was finally unknowingly helped in 1859 when the Gadsden Purchase from Mexico's dictator General Santa Anna after the U.S. War with Mexico added what is now Arizona to the Santa Fe, New Mexico Catholic Diocese. The Bishop for the Santa Fe Diocese ordered a scout sent out to Arizona, where he eventually discovered San Xavier Del Bac Mission and reported back his findings.

Repairs were later made with money from the New Mexico Catholic Diocese and a priest was assigned to serve at the San Xavier Mission. Schools were begun many times at San Xavier Mission, with the church receiving funding through the U.S. Government for a school, but the Indians would have no part of sending their children there. That first attempt in 1864 failed miserably, as local Indians would not send their children, nor even go anywhere near the school even for community tribal meetings. The strong earthquake of 1887 did very minimal damage to the church, but caved in some of the operating silver mines in the area.

Later in 1895 (10 years after the Arizona College of Mines [later renamed University of Arizona] had been established in nearby Tucson Arizona) a school was again opened, with a grant of $1,000.00  given to repair the building using local Indian workers. Additional classrooms were later added on at the start of the 1900's and by 1947 a new school was built next to the church for the Papago (later renamed as Tohono O' Odham) children.

This site is copyrighted© and registered® TUCSON MUSEUM, TUCSON MUSEUM AND LIBRARY,  TUCSON HISTORICAL SOCIETY - No part of the information or content found here may be reproduced or duplicated in any form whatsoever without the prior written permission of  'TUCSON MUSEUM or the TUCSON MUSEUM AND LIBRARY'. All rights reserved. You may not, except with our express written permission, distribute or commercially exploit the content. Nor may you transmit it or store it in any other website or other form of electronic retrieval system with the exception of 3rd party items and others contained within the website that are in the public domain and or except for educational purposes under U.S. Fair Use Copyright Laws and a link back and acknowledgement of the Tucson Museum is mandatory.